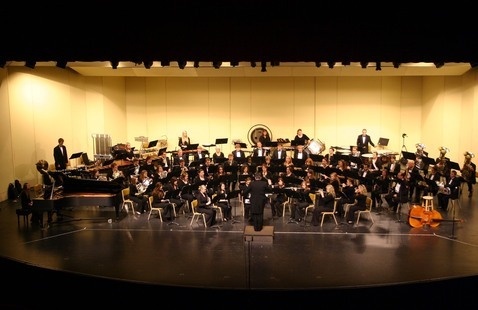 Grand Forks, ND: The University of North Dakota Wind Ensemble and University Band, conducted by Dr. James Popejoy, will present a combined concert on Tuesday, March 9, at 8:00 p.m. The performance will be held at the Chester Fritz Auditorium on the UND campus and is free and open to the public.

Those attending the concert are asked to wear masks, and should plan to sit socially distant in the auditorium to comply with university safety protocols. The ensemble members will be wearing masks and using bell covers on their instruments, as well as sitting six-feet apart on the stage. The concert will also be live-streamed and can be found on the UND Music Department website: und.edu/music

The University Band will open the concert with Henry Fillmore’s most famous march, Americans We. They will follow with performances of Tryptich II by Elliot Del Borgo; Robert Sheldon’s A Longford Legend; and the Finale from Peter Ilyich Tchaikovsky’s Symphony No.2. Undergraduate conductor and senior music education major Katlynn Ellis will lead the band in a performance of Fantasy on “Yankee Doodle” by Mark Williams.

Opening their portion of the concert with the Mother Earth fanfare by David Maslanka, the Wind Ensemble will also perform A Symphony of Fables by Julie Giroux, and Samuel Hazo’s exciting Ride. Featured soloist on this concert will be senior music performance major Benjamin Helfrich on the award-winning Symphonic Variant No. 1 for Euphonium and Band by noted contemporary composer James Curnow. Celebrating the 125th anniversary of John Philip Sousa’s most famous composition, and our National March, the Wind Ensemble will close their portion of the concert with The Stars and Stripes Forever.