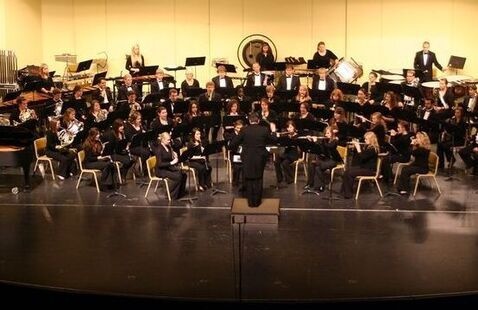 This concert features the UND Wind Ensemble and University Band. The theme is "Out of this World," presenting music related to Outer Space!

The event will be livestreamed at und.edu/music/stream for those unable to join us in person.

The University of North Dakota Wind Ensemble and University Band, conducted by Dr. James Popejoy, will present a combined concert on Tuesday, October 12, at 8:00 p.m. The performance will be held at the Chester Fritz Auditorium on the UND campus. Tickets, available at the door, are $7.00 for adults, $3.00 for students and senior citizens, or $14.00 per family. Those attending the concert are asked to wear masks to comply with university safety protocols. The ensemble members will be wearing masks and using bell covers on their instruments. The concert will also be live-streamed and can be found on the UND Music Department website: und.edu/music

In honor of UND becoming the first school in the country to partner with the United States Space Force, the theme of the concert is “Out of This World!” featuring music inspired by space. The University Partnership Program was established by the USSF to harness innovations from universities across the country.

The University Band will open the concert with music from composer John Williams (theme music from “Lost in Space” - “Star Wars” - “SpaceCamp” - “E.T.”), and Gustav Holst (“Mars” and “Jupiter” from “The Planets”). Their program will also include “Open Space” by Brian Balmages; “Saturn: The Ringed Planet” by Rob Romeyn; and “Swingin’ on the Moon” featuring well-known jazz standards such as “Blue Moon,” “Moonlight Serenade,” and “How High the Moon.” A performance of “The Invincible Eagle” by John Philip Sousa, the official march of the U.S. Space Force, will round out their concert.

Opening their portion of the concert with “Journey Through the Stratosphere” by noted film composer Rossano Galante, the Wind Ensemble will continue with a performance of a new wind symphony, Robert Buckley’s “The Seas of the Moon.” “By the Light of the Polar Star” by John Philip Sousa and David Gillingham’s monumental “Galactic Empires” will also be featured in their program. The Wind Ensemble will close their portion of the concert with Michael Giacchino’s “Symphonic Suite from Star Trek.”