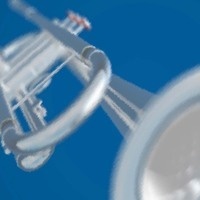 The UND “Trumpet Volunscary”, in its 11th year, is an event that brings together the trumpet studio for a concert featuring the UND Trumpet Ensemble, student soloists, and special guest trumpet artists. Past guest artists have included Dennis Edelbrock (Founder of the National Trumpet Competition), Tim Hudson (Carolina Brass), Jason Carder (trumpeter for Yanni), and Richard Gillis (University of Manitoba). This year’s guest artist will be Dr. Daniel Thrower of the United States Air Force Heartland of America Band and Offutt Brass Ensemble. The UND Trumpet Ensemble will present Robert Levy’s Dialogues, which will be our 2019 submission for the National Trumpet Competition, held this year in Pennsylvania.  Other works include student solos (Pakhmutova Concerto, Riisager Concertino, Vizzutti Explorations),  mixed ensembles (Britten Fanfare St. Edmundsbury, Gillis An Opening), mass Ensemble (Morales Within Sacred Walls), and a video montage “Year in Review.” Dr. Thrower will be performing solos by Herbert L. Clarke, Eric Ewazen, his own composition titled “Frenetics,” and a special duet Dr. Thrower composed specially for the 2019 Trumpet Volunscary played by Drs. Thrower and Ingle.

Daniel Thrower received his Doctor of Musical Arts degree from Arizona State University in 2007 under David Hickman.  He earned his Master and Bachelor of Music degrees from Brigham Young University, studying with David Brown, Newell Dayley, David Blackinton, and Bret Jackson. Dr. Thrower has taught at Brigham Young University (BYU), BYU-Idaho, The University of Texas at San Antonio, The College of Eastern Utah, Utah Valley University, and continues to teach an online music course for Utah State University.  He has appeared as a guest clinician at more than 60 universities, music conferences and public schools. During the summer of 2018 Dr. Thrower served as the resident trumpet professor at the International Music Festival in Barra Mansa, Brazil.  At the festival’s closing concert Dr. Thrower premiered his own 25-minute Concerto for Trumpet and Orchestra.  The trip was partially sponsored by Giddings Mouthpieces.  An internationally award-winning composer, Dr. Thrower’s compositions challenge the professional musician while being accessible to general audiences.  He owns and operates Gilded Music Press to make available his compositions and teaching materials. In 2011 Dr. Thrower joined the United States Air Force Band of the West in San Antonio, TX.  He was transferred to the Heartland of America Band at Offutt Air Force Base, Nebraska, in 2015.  Among his military career highlights was performing for the Presidential Inauguration in January 2017. Dr. Thrower is a proud Cannonball Performing Artist.  He is also an avid endorser of Giddings Mouthpieces.