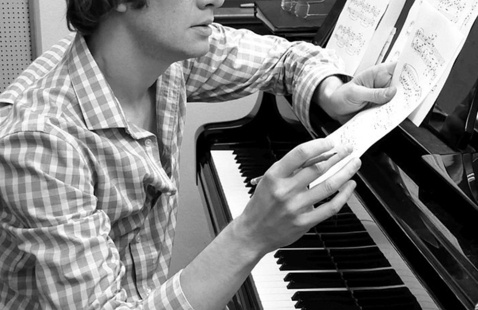 Russian pianist Arsentiy Kharitonov’s debut concert at Carnegie Hall was cited in the New York Observer as one of New York’s top six concerts of the 2015 – 2016 season.

He started playing piano at the late age of sixteen, in the Rimsky-Korsakov College of Music in Russia’s famed St. Petersburg Conservatory. His musical progress was immediate and astounding. Within three years, he was giving solo recitals, which featured his own compositions and improvisations in addition to the standard piano repertoire. His first orchestral appearances included solo performances with the St. Petersburg Philharmonic and the Mariinsky Theatre Youth Philharmonic Orchestra.

A prizewinner of national and international competitions, Mr. Kharitonov has been heard in solo recitals and with orchestras in Russia, Europe, Asia, and the States. “His style is unlike any of his contemporaries, and harkens back to earlier times . . . Trumping some of the more prominent musical gymnasts, this is genuine poetry and a rare sincerity issuing from the deeper reaches of the human heart.”

Kharitonov’s music attracts audience and performers with its virtuosity, rich harmonic language, and memorable melodies as well as its intensity and astute expression. His music has been commissioned by a number of spectacular musicians such as cellist Cicely Parnas, violinist Julia Bushkova, conductor and recorder player Paul Leenhouts, ensemble ViolUNTi, vocal ensemble Tapestry, and musicians from Mariinsky and Chicago Symphony orchestras.

Arsentiy Kharitonov holds a Doctor of Musical Arts degree from the University of North Texas in piano performance. He is an active advocate of lesser-known musicians such as Leo Ornstein and Robert Kahn. He founded Masterpiece Finder, an organization that researches and highlights music masterpieces of historical and contemporary composers. Grand Forks discovered  Mr. Kharitonov,  the pianist with the vocal ensemble Tapestry, in 2018 when the group performed in the Museum’s Myra Presents Series.