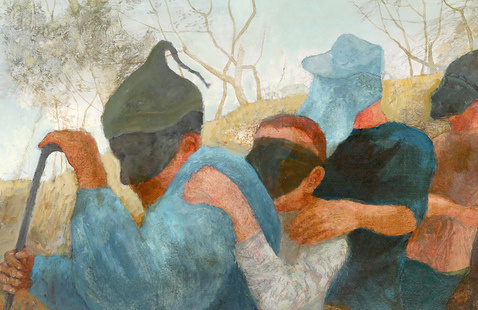 For forty years Frank Sampson—now ninety-two years old—taught painting and printmaking at the University of Colorado in Boulder. He returns for one month in summer and one month in winter to the North Dakota family’s home in Edmore where he continues to paint. His parents, Abner and Mabel Sampson, were farmers. He visits his brothers Abner Jr., now in a Devils Lake nursing home, and eighty-year-old Clark who continues to farm with his sons. Another of the farming brothers, Milton, is deceased. His youngest brother Douglas—also deceased— took his PhD from Yale, became a nuclear scientist at Los Alamos, and taught at Penn State for three decades.

When asked about his paintings, Mr. Sampson says, In looking for past experiences and antecedents that may have influenced my work as an artist I think immediately of my childhood on a farm near Edmore, North Dakota surrounded by pigs, chickens, horses and cows as well as a story-telling mother who entertained and rewarded her five sons with vivid adventure stories. These wonderful tales were full of fantasy and frequently animals played major roles.

Frank Sampson earned his BA in art from Concordia College, Moorhead, Minnesota (1950) and his MFA in painting and printmaking from the University of Iowa (1952). Sampson joined the United States Army (1954-56) and returned to Iowa for three years of postgraduate work under Mauricio Lasansky, the groundbreaking and world-famous printmaker (1956-50). He won a Fulbright to Belgium to study the paintings of Hieronymus Bosch (1959-60). Upon his return to the States, he joined the Art Faculty at the University of Colorado in Boulder in 1961 and retired as a full professor in 1990.