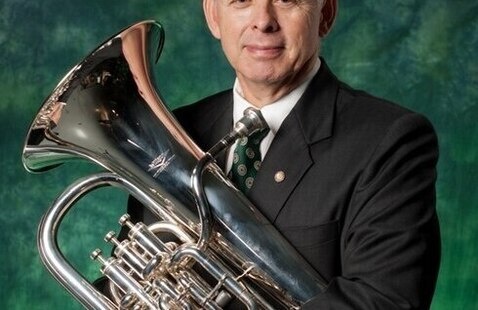 Dr. Bowman is one of the foremost euphonium players in the world and as pedagogue, he has no rivals.  He was the former Euphonium Soloist in the United States Air Force Band and is the  Regents Professor of Euphonium, University of North Texas.  His history of euphonium “firsts” is impressive:

• Master teacher at the first Deutsche Tubaforum workshop to include the euphonium, tenor horn and baritone, Hammelburg, Germany, 1991

This is his third return visit to UND and his residency activities include the following:

Dr. Bowman will perform four solos with the UND University Band and Wind Ensemble. Tickets are sold at the door and are $7 for adults, $3 for students and seniors, $14 for families of 4, and current military are free with ID.

Dr. Bowman will talk to the UND Music Majors about Military Band Careers.