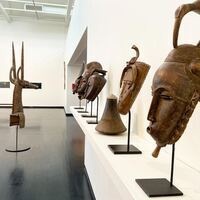 Commissions & Collections at the North Dakota Museum of Art

Vernal Bogren Swift: Meadowlark Buried Her Father is a collection of thirteen batiks inspired by the history of bone fossils in the prairie regions of North Dakota, Minnesota, and Manitoba. The prairie fossils that inspire the batiks are mostly from the Eocene epoch of deep time. This is the time, millions of years ago, that follows the falling away of the dinosaurs. I focused on the Eocene epoch because, for one thing, the word means “Recent Dawn” which is charming in itself.  Small animals flourished in this time and the air became sweet with the scent of flowers and grasses.  Dragonflies were bigger than the horses.  There were no humans, I do not know how big the bees were, but much of what began those millions of years ago has continued into modern time, with sizes varying.  Refreshing after an age of dinosaurs . . . .

Artist Donovan Widmer is a jeweler and metalsmith who moved to Grand Forks in 2004 to teach at the University of North Dakota. He was appointed Chairman of the Department of Art and Design in January 2017. Five months later, he and his wife acquired a new home in East Grand Forks, Minnesota: specifically, a house with the potential to house a private studio. November 1, 2017, Widmer has been named by the North Dakota Museum of Art as the 2018-19 winner of the Art Makers Award.